I’ve added to my collection of horse show awards: 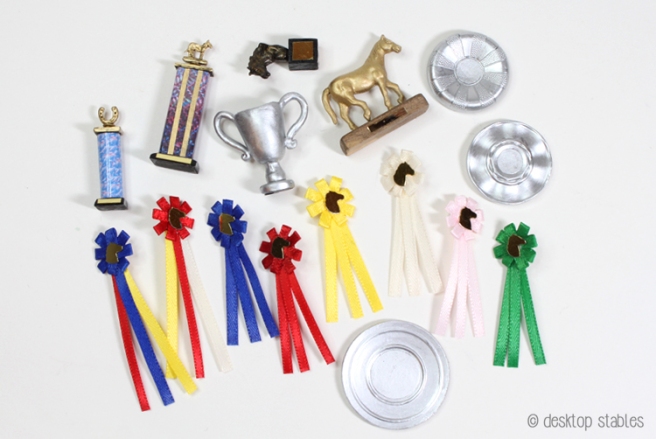 This is kind of a tutorial, but like many of my “tutorials” it’s more of a creative-process type post. I’ve stuck it under Tutorials anyway, and I will try to explain how I made each one as best I can!

Starting with the easiest, the silver plates.

These were made from large buttons.

The holes were covered with circles of cardstock, then the entire thing was covered with silver alcohol ink. (I love this stuff) Here they are with their first coat:

These usually have some sort of engraving in the center, but I left mine plain as I didn’t trust myself to free-hand a design. One way to put a custom design in the center would be to print on a clear label sheet, cut it to size and stick it on.
The gold stands were bent from wire, after doing a quick google search on plate stands. 🙂

Next, the gold horse:

The base was cut and sanded to shape from a piece of craft wood, then stained with watered down paint. The gold piece was cut from the edge of a Rio-Rondo parts sheet.

The horse is a H0/model railroad scale horse, painted gold.

The horse bust was my attempt at making a “bronze” statue. 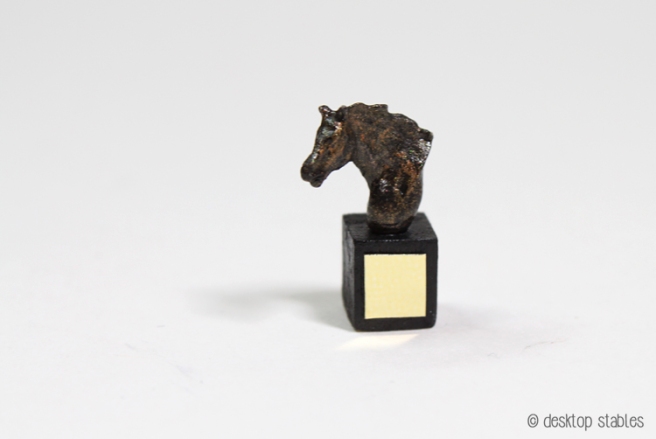 The head was also made from a H0 scale horse. I had a duplicate of this one so off went it’s head!

This was difficult and potentially dangerous SO please be careful if you’re going to try this yourself. A mini whinny would be easier to cut through, I think. (or sculpt one if you’re feeling brave!)

The base was cut from a square dowel using a mitre box. (which is another new favorite thing!)

I mixed up a blob of magic sculpt to even out the bottom, and once that was cured, covered it in paint. 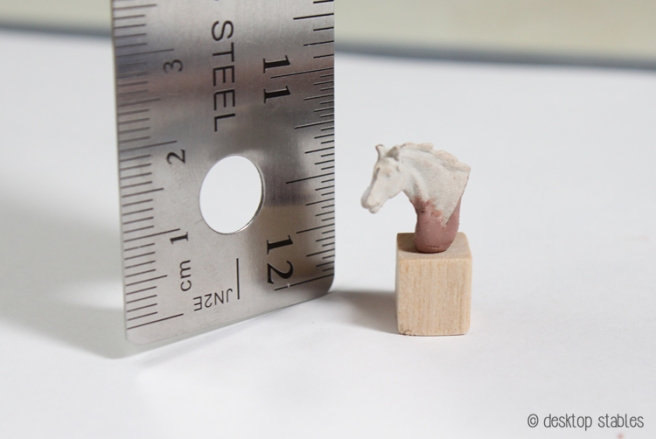 The “bronze” coloring was made by mixing brown and metallic gold paint together, dry brushed over a black layer. There are probably a dozen better ways to do it – this is just an attempt from what I had on hand. The gold piece was cut from a large gold sequin instead of the metal this time.

Next, the trophies. Ohhh… those darned trophies… >_<

The bases were cut from wood… 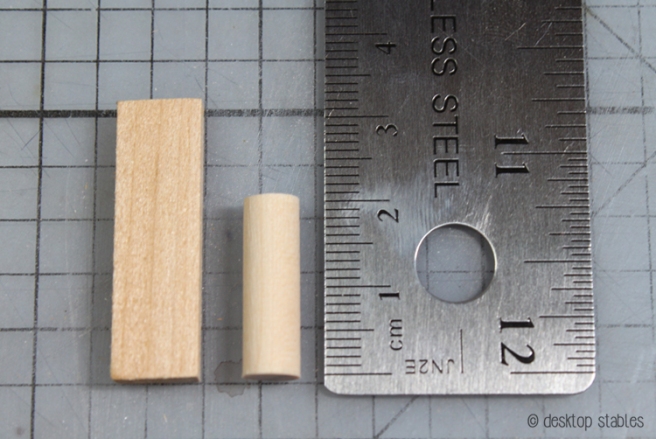 Then covered with holographic-patterned paper I printed up off the internet. A metallic scrapbook or wrapping paper might look better, but like I said I was trying to use what I had! 🙂 I covered the pattern with a piece of clear packing tape before wrapping it around each piece.

All of the other pieces – the bases and toppers – were sculpted from black polymer clay. Unfortunately I don’t have any photos showing this, as the pieces were super tiny and super fiddly and my patience was wearing thin. Once they were baked I glued them all together with drops of E6000, hoped they would stay glued together, then covered them with a coat of gold ink.

Last, but not least, the trophy cup.

The shape of the cup was made by wrapping polymer clay around a sharpie. I wrapped that in foil beforehand, so I could slide it off easier, then left the foil in the cup until after it was baked.

There was a second cup made around the larger mascara tube, but it didn’t turn out very well. 😛

I added two handles and a (somewhat lopsided) base afterward, then painted the entire thing silver once it was baked. It was a pain to sculpt though. Next time, I think I’ll hunt down a plastic doll trophy and repaint that instead! XD 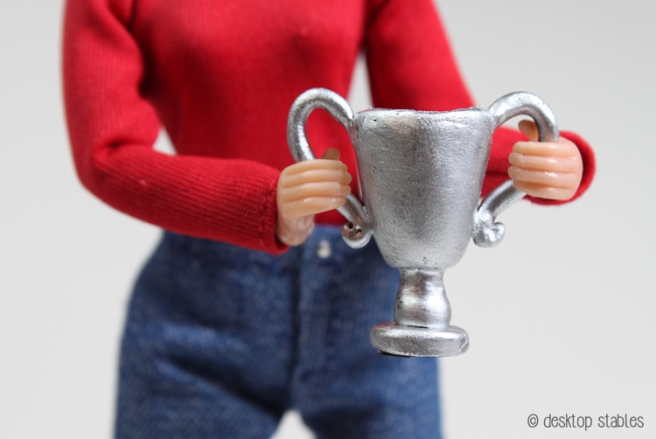 I’ve posted a tutorial on how I make hip ornaments on my blog today. Link in bio! 💜
💚💜