My S’ Justadream (who I’ve nicknamed Amber, as she really reminds me of an old mare by that name who lived at the ranch I used to ride at) has been begging me for some sort of Arabian tack ever since I got her. Being the awful procrastinater that I am, I kept putting it off. Then Melissa N. of Adiva Arabians posted this wonderful tutorial on her website (http://www.adivaarabians.com/home.html) which inspired me to give some of her methods a try.

This is what’s come from it thus far: 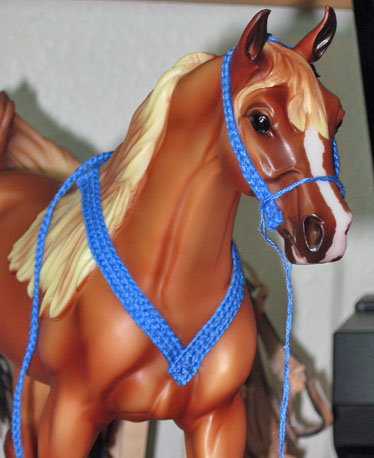 I will be adding tassels, a nose chain and cowries (along with other little details) here soon. I’m very pleased with how it’s coming along and am already thinking of making more in other colors… this little mare seems to be like that person who needs say, the same piece of clothing in several different colors. (not that I’m guilty of that or anything… heh…) 🙂

Working on this piece has got me eyeing my other “in progress” Arab pieces as well: 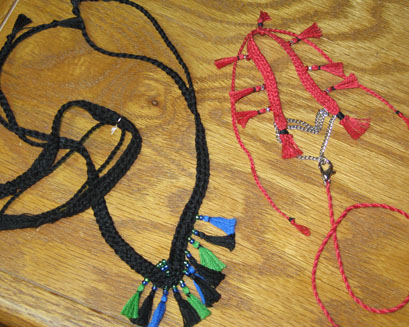 What is up with me and starting things… only to tuck them away and never finish them? The red halter (which I mentioned here a while back) is nearly finished… but there are little things about it that I didn’t like and meant to fix later on. Then the black one… haha! I believe I started that one in ’05! And ever since then it’s been stored in a plastic box with other odds and ends, waiting for the day it’ll be finished. It was the second braided collar I had attempted. (the first I made for my full costume, which I’ll show you at a later time) I was happy with it then but looking at it now I realize the braids are much too thick. And I don’t know what I was thinking with the colors. 😀 I could salvage the collar and breathe some new life into it, and possibly the halter too, but that will take a lot of extra work. I wonder if I should start a brand new one altogether?

Anyway, I’m making a promise to myself that my newest set will not end up in the “to be finished someday” pile. 2010 is the year of fighting procrastination! Hah! 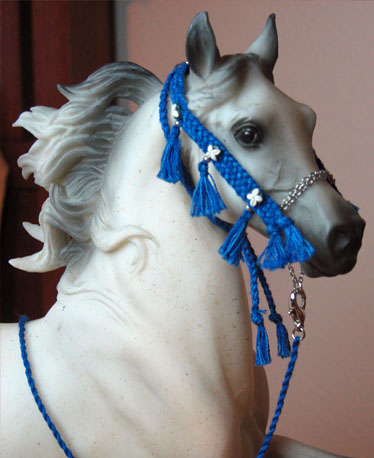 Voila, my first, made to fit Marengo. It’s not perfect, but hey, first tries never are. Unless you’re some crazy prodigy or something… 😉

Shared some photos from cross country at Rebecca Farm today. Link to my blog in bio! ☺️
Stickers from @khrysalis_studios arrived a few days ago, along with a couple extras 💕 Thank you so much Rayvin!