My grandparents took my family to Disneyworld this year. (I know… we’re completely spoiled!) My grandma’s been going every year for many years now, (she was at Disneyland in CA on opening day, back in 1955) so she’s always really excited to bring her family with her. I’m really thankful I got to go.
The trip was both fun and exhausting! Disneyworld is HUGE and it takes several days to see everything. Even then, it’s easy to miss a bunch of stuff, simply because it’s so massive and so packed full of detail. But I had fun. It was great to get away for a bit.
I took my Rebel along with the hope of getting some good pictures, which I’ve uploaded on my Flickr account here: Disney Set

While I was there I decided to go on a scavenger hunt of sorts, looking for horses and horse-shaped-objects around the parks. I found loads, but I know I missed many, many others too.

The Magic Kingdom has a bunch of horses, including these posts all along Main Street USA:

There are real horses on Main Street too. They pull the trolleys down the street during the day: 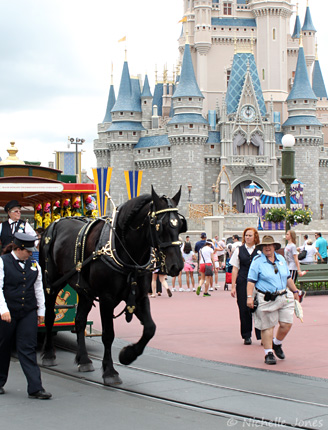 I love the gold mickeys on his harness!

This is inside Cinderella’s castle, made out of hundreds of colored tiles:

Crystal horses pull a crystal carriage inside one of the shops:

There’s a horseless harness and hearse parked in front of the
Haunted Mansion:

And of course you can’t forget the carousel. I honestly don’t know why I didn’t get any close up pictures. 😛

Hollywood Studios had a few horses:

These are on the outside of the Great Movie Ride, which is made to look like the Chinese theater in Hollywood, CA: 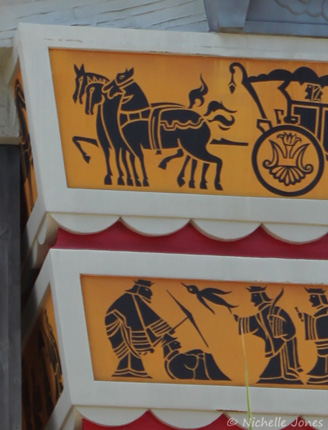 Inside, one of the carousel horses from Mary Poppins: 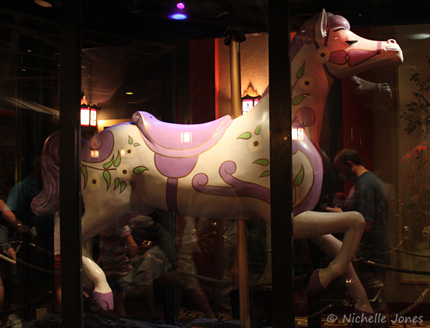 Last but not least, Walt Disney himself, outside the “One Man’s Dream” exhibit:

2 thoughts on “Disney Horses, Part I”