I will admit that I’ve wanted one of the wood Breyer barns or knock off barns for my herd. But I always told myself no… they’re too big, cost too much, and… what on earth do I need a barn for anyway?

For a while, those excuses worked. But over the past few days I’ve gotten it in my head to attempt to build one myself. Not out of wood, because I currently can’t afford any wood and whatnot, but out of cardboard pieces which I cut from various boxes I’ve managed to collect in my closet. (OHNOES I’m a box hoarder! ACK!!)

So, I grabbed my trusty notebook filled with random ideas/drawings and started to figure out how to make this silly idea a reality:

Soon the boxes were dismantled and my room was filled with the carnage:

And the pieces I actually wanted to use were set aside, before I cut them to the measurements I came up with: 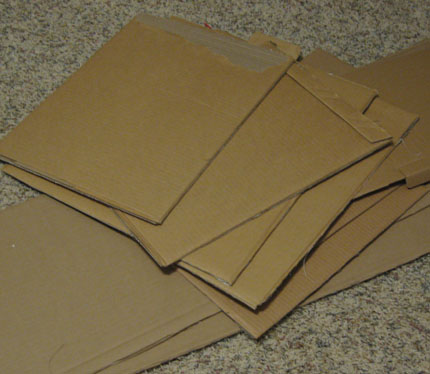 And this is what I have thus far. The pieces have been cut and aren’t put together just yet. I’ve leaned them up against each other to get an “idea” of what it’ll look like when it’s actually assembled. That’s why it looks all terrible and uneven, hah! (the cat knocks this down every chance she gets and glares at me like it’s somehow my fault.) 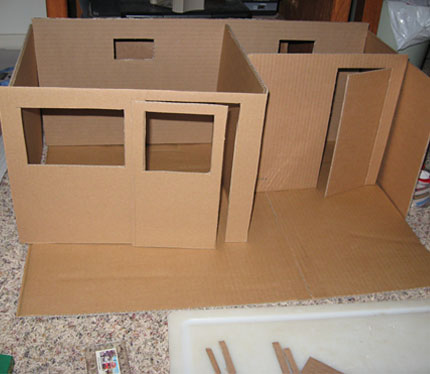 Obviously it needs a lot of work… but I’ve been enjoying myself. For some reason I find thinking up details I’ll add to it really fun. Which, I guess you could say, is the sole purpose of me actually building this thing.

I built a barn out of a box for my classic horses years and years and years ago. It had three seperate stalls and was painted white and green. I really enjoyed that thing… it ended up in the garbage some time later though. How sad.

This one may have a longer life, but it will probably have the same fate someday. I’m nuts I tell you! But I love every minute of it! XD