Recently Breyer released their yearly to-be-retired list. The packing set was included on this list, and I figured I would pick one up before prices skyrocket. (which they tend to do with RR items once retired, for some reason…)

It arrived today and I’ve had some fun tacking up my mule. I’m kind of “eh” about Breyer tack (besides their fancy blankets- I love those!) but I’ll make an exception for this set. I mostly wanted it because A) it was designed by Jennifer and B) I want to make a pack set (eventually…) but the very idea of skiving all that lace makes me want to cry. That would hurt. A lot.

But I’m perfectly ok with modifying this set, once I make the time to do so anyway. For now, here’s a sort of review of it straight out of the box. 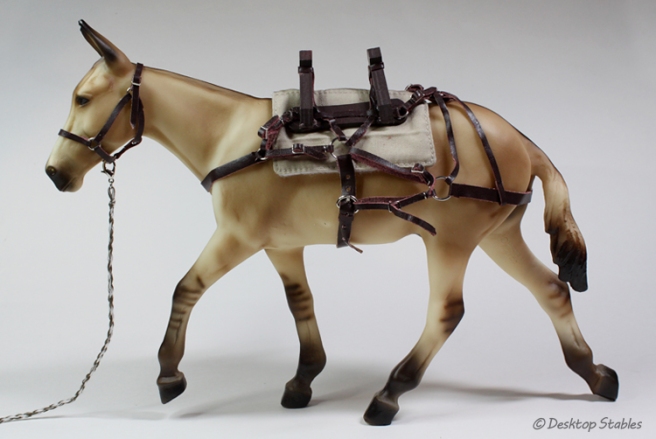 I’m really surprised (but pleased!) with how soft and supple the straps are. They’re not paper thin, but a lot thinner than unskived leather lace, that’s for sure.

I did find it really tricky to put on, partly because there are lots of straps and partly because of the way it was packaged. A lot of the straps are bent and twisted and will need some reshaping to lay flat. Some are glued to the jump rings, but I’m not sure of that’s an intentional thing or not.

Even though the straps are thin, they’re not quite thin enough around the buckles, making it really difficult to adjust. I kind of gave up here, as some of the folded edges were coming undone. The buckles are really nice though.

Here it is with the panniers attached:

The panniers are really nice.

They slip on the top and are held in place with a long leather strap. It’s a snug fit on mine but it makes the whole set feel very secure. 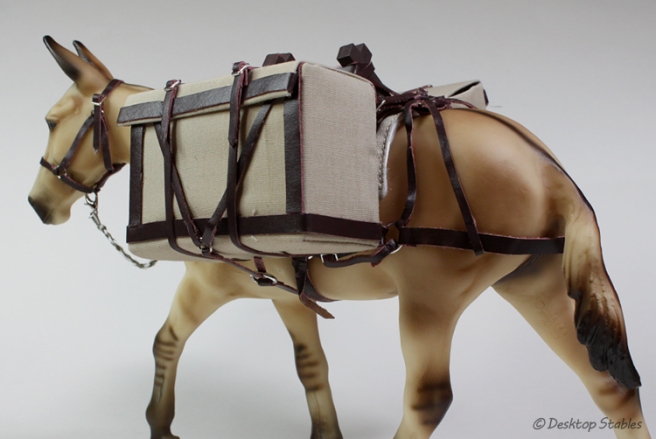 Also, my mule looks kind of scary from the front, doesn’t he? Ha! 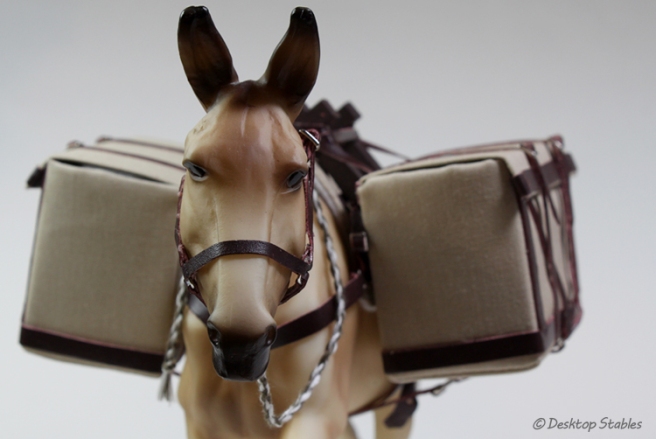 The panniers appear to be made from a card/paperboard box, and they do open, but I’m not sure if they’re really designed to since mine kind of fell apart… but that’s a super easy fix.

All in all I’m really pleased with this set. Breyer did a fantastic job! I am looking forward to customizing it though, starting with those buckles! XD