This horse has such an attitude! I dunno if all of the running stallions are quite like this one, which is Breyer’s “Flame.” (as in Flame, the Island Stallion, from  a book by Walter Farley which I haven’t read yet… heh…) I think it’s the way his eyes are painted… with the pinkish eyewhites and all… which is rather weird, actually. I think seeing that on a real horse would make me think that something’s wrong. I dunno!

Even if his eyewhites were white he’d still look like he’s about to take a bite out of you. 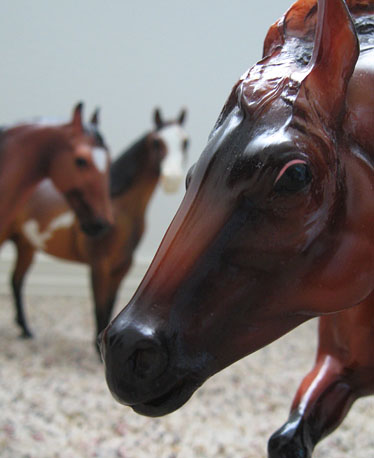 And for some reason, I find this absolutely hilarious. It makes me love the mold. He’s not exactly popular because he’s so wonky and all… but I’d rather take a wonky horse with a personality then one without! Even if they are just plastic. 🙂