Several years ago I attempted to make a Showring (or “Hollywood”) style Arabian costume. I was pretty happy with how it turned out… but that was years ago, and I’d like to think I’ve improved at least a little bit since then!

This past week I’ve been working on updating it, including giving it a brand new bridle, as the original went missing long ago.

Here’s how it started out: 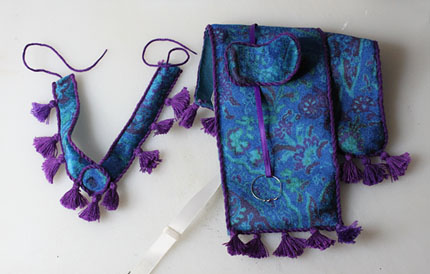 I made it to fit PAM, as it’s much too girly and princess-y to be worn by the stallions. XD It’s also too big for JustaDream and Weathergirl’s pose isn’t ideal for a showring costume anyway. (and well, neither is the PAM, but she’ll have to do for now!) 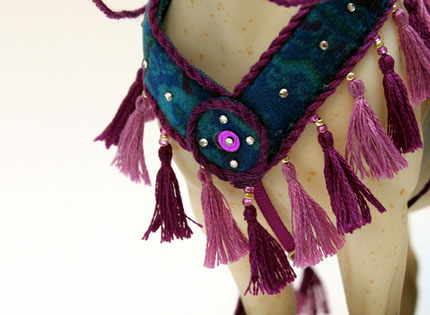 One thing I replaced was the girth. It originally attached on the wrong side and was made with a very slick ribbon. This time I used a band of elastic and cheated by giving it a hook-and-eye closure, instead of an actual buckle. It’s not realistic but it’s easy… and I like easy when it comes to tacking up models!

I also added a strap to the collar that attaches to the girth. Why I didn’t have one originally is beyond me. (then again, the girth was on backwards too. I rode real horses at that time so what was my excuse??)

The round stirrups were replaced with English ones (made out wire and silver tape… that’ll do till I replace them… maybe…) and while they’re not adjustable, a doll can sit in the saddle without too much difficulty.

It’s not perfect but I’m happier with it now.

One thought on “Updated Costume”