So! My sister has kindly lent me her laptop to use while she’s home for the summer, which is really nice as I’ve missed having a computer to use, especially when it comes to editing pictures and posting nonesense on this blog.

I’m not exactly sure what’s wrong with my PC. I think it’s a mix of bad viruses (which infected it a long time ago and weren’t completely removed) and the age of the computer itself. Kind of annoying, especially when you use it for SO MUCH.

But it’s not like I’ve had a lot of extra time to spend on the darn thing, as I’ve been kept very busy with work. In a way, not having access to my stupid computer 24/7 has been really nice, and a sort of blessing I suppose, as it forces me to focus my attention elsewhere.

Eventually I will need to replace it, but I’m not sure what to do about that just yet. Money is an issue like usual, and I’m not sure if it’s the wisest thing for me to drop $600-700 on a new one right now. Psh.

Aside from that and other RL drama, I have been keeping myself somewhat occupied when it comes to models. A couple weeks ago I had a random urge to start working on some new arabian halters. Not just one or two, mind you. I decided to start SIX of them at the same time. Yeah, what’s wrong with me? After a couple hours and an awful backache later, this was the result: 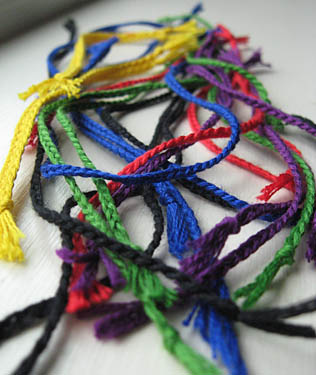 Since then I’ve gotten a few of them stitched together, and a couple already have their buckles and actually resemble halters. Yay! The yellow has a collar to go with it as well. I don’t know if the others will or not just yet, but I do know that some of these will eventually be up for sale, if all goes well. I’ve got to be one of the slowest tack-makers out there. 🙂

Also, I’ve gotten a lot of work done on the barn, which is finally starting to come together! It’s been painted and varnished in places that need it, the windows have “glass” in them,  I got the light for the tack room to cooperate with me and the stall itself is filled with straw, which the cat (of course) tries to eat whenever she can. All I’ve got left to do with it is add all the fun details. 🙂 Hopefully I’ll have lots of pictures to share with you all soon! 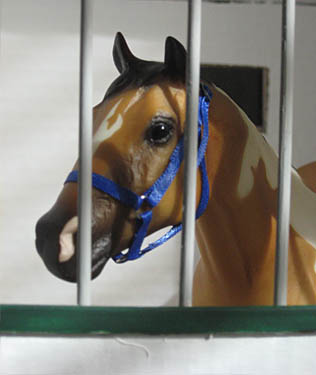