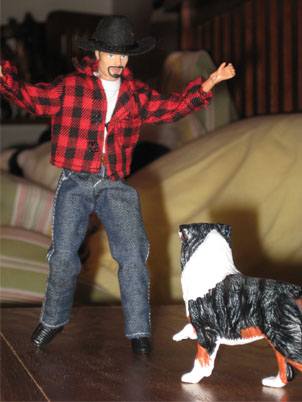 The #1 thing that bothers me about the male Breyer dolls is that they ALL LOOK THE SAME. Every single release has had black hair and blue eyes. In real life that’s a rather striking combination but it’s gotten old for my silly rider dolls.

A while back I decided that in order for me to be able to tell my cowboy apart from the farrier, they were going to need makeovers. So the farrier grew a beard and the cowboy’s hair was painted a dark shade of brown.

I don’t know if it’s an improvement or not. 😀

Some saddle details…
The saddle is finally done! 🥳 More on my blog today 📷